Cost of services and products within the medical industry is often a hard thing to find. As we like to be an open book here at Oculus Prosthetics and can appreciate the fact that all surprises are not good ones. Give us a call or email and we will be more than happy to share our  set price list for all of our products services. Included in each package is a follow up service for any concerns you may have so you have peace of mind.

Artificial Eye Cost should not be something that keeps you from getting the best product and service available. We have worked out the best possible pricing for your needs to try and keep it affordable. As it is quite difficult to get funding for a prosthetic eye here in Australia we know just how hard it can be to get funds together. Private health insurance will cover a portion of the cost however that portion is quite often out weighed by the extra premium you will pay just to get that cover. Medicare and the NDIS will not cover the cost of an eye as they deem it to be a non supportive device as this point in time. Hopefully this will change soon.

Artificial Eye Cost varies drastically around the world. In the United Kingdom the NHS will fund an eye prosthesis and privately you will pay around $1700 pounds. In the USA you can pay from $1800 right through to a Rolls Royce $8500. (That doesn’t even come with an engine)

As you can see we are quite lucky here in Australia. We are able to keep costs down so the end user pays a fair price for the product they are purchasing.

The question of how often a prosthetic eye needs to be replaced is one of the most overlooked in the older artificial eye wearing generation. Why do I say this you ask!  Out of all my clients I see, the older generation quite often wears an artificial eye on average for more than 20 years before replacing it. Their number one reason is that “it has not been bothering me too much”. If you think of a prosthetic eye like an old shoe, it may be comfy and familiar but it isn’t always acting in your best interests. Eye socket health is a really important thing to remember. Over time your socket does change which means your prosthesis may not fit like it used to. 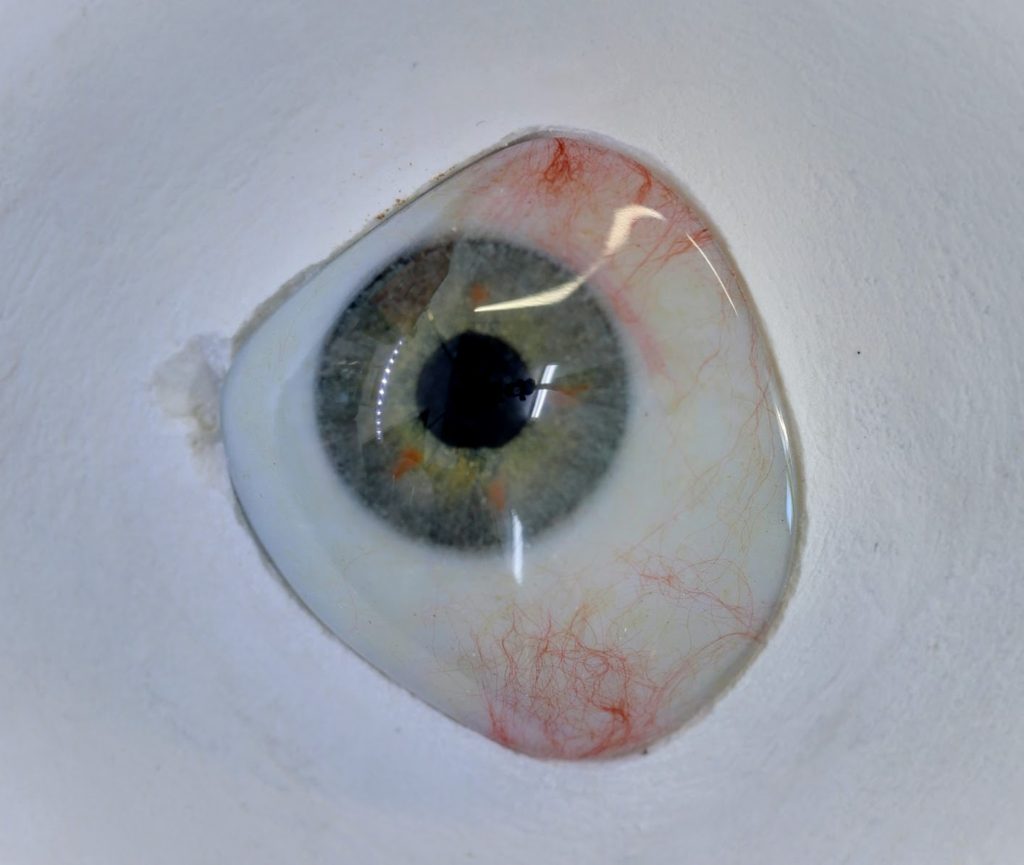 Although having your eye polished every four to six months is really important and helps to promote a healthy socket, this doesn’t help with the fit of the prosthesis. You may begin to notice that you are having some discharge or your socket feels dry. Perhaps your eyelid is a bit droopy or the prosthesis has begun to spin easy. These are all signs of wear and some alarm bells should start going off that you may well need to consult your favourite Ocularist to get a prosthetic eye replaced and a new artificial eye made.

END_OF_DOCUMENT_TOKEN_TO_BE_REPLACED

I have had the pleasure of making Audrey her eye prosthesis over the last couple of years. This has been a difficult task due to her implant being incorrectly fitted back when she first had her eye removed. What a journey she has had up until now.

These photos were over two years ago when I first met her and her family. She had her eye removed due to retinoblastoma (cancer of the eye). The survival rate for retinoblastoma is 95%. However, that rate depends on several factors, including whether the cancer has spread from the eye to other parts of the body.

I did the best I could with how the implant was sitting, which was a big improvement on what she had been given to start with. I then referred her back to a oculoplastic surgeon for a revision of the implant. As I suspected a MRI showed that the muscles had been attached incorrectly which resulted in the implant being in the wrong position.

Audrey recently had corrective surgery of the implant which went well and I am about to see her again for a temporary ocular prosthesis which she will wear for three months until all of the swelling has gone down, then she will get her new definitive prosthesis. EXCITING!!!!

As a parent of a child with an artificial eye I have always wanted what is best for my child in these difficult situations and that is exactly what Audrey’s parents want for her. They came to me when I was first starting out on this journey and put their full trust in me with their daughter. They told me what their concerns were and what they wanted to achieve for her, so we came up with a realistic end plan together on a rough timeline. The photos above are on the left before I had seen her and on the right the custom prosthetic eye I made her before her corrective surgery. I will have some new improved photos to put up shortly.